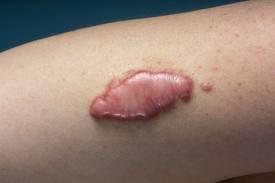 This is a keloid scar.

Keloid scar is an overgrowth scar tissue that develops around a wound usually after a wound has healed. When there is skin injury, scar tissue forms over the wound to repair and protect the injury. In some cases, it grows excessively and forms a keloid scar.

The cause is not known.

Keloid scars are completely harmless but they can cause cosmetic concerns especially if they form on the exposed areas like chest and face. Prominent and unsightly keloid scars can lead to social and psychological distress.

2 things about keloid scars that usually bother people : the size and the colour.

How do I treat them? – Keloid removal

Once a keloid scar forms, the texture and the quality of the skin over scar area has changed permanently. The appearance of a keloid scar may shrink and improve over time but will not disappear completely.

Treatment is not necessary unless you are bothered by the scar. Treatment of keloid scar aims to reduce the visibility of the scar as much as possible.

Steroid injection is by far the quickest and most effective way of reducing the appearance of keloid scar. Most keloids respond well to injection of a steroid called triamcinolone directly into the scar. The procedure is very safe with minimal discomfort.

After an injection, it takes time for the keloid to respond and shrink. More than 1 treatment is usually necessary to produce optimal results.

Steroid injection has minimal impact on the the keloid discolouration, which usually requires other forms of treatment such as laser treatment.

Surgery is the only way to remove keloid scars completely. However, removal by surgery can result in an even bigger scar if you already are prone to keloid scar formation. Therefore, a steroid injection and/or laser/IPL treatment is usually recommended first.

It is important to consult a doctor before undergoing any treatment for keloid scars.

Our clinic offers treatment for keloids scars. If you wish to know more, visit us at S Aesthetics Clinic to speak to our doctors.